Business friendly COP21 will showcase the commitment of the private sector

The Sustainable Innovation Forum Stakeholder Launch hosted by Climate Action and UNEP at the Shangri-La Hotel Paris, focussed on the significant role of private sector innovation in driving low carbon development. Mr Guignard, (pictured bottom left) addressed attendees saying: "We are building a very business friendly COP which will show the commitment of the private sector to the spirit of the convention… the private sector take the threat of climate change very seriously and their strategies are taking into account whatever is needed to fight against global warming."

These sentiments reflected those of French President, Francoise Hollande, who earlier in the day at the Business & Climate Summit spoke of the “transformation of the world” that climate talks in Paris can provide if an agreement is reached, and how business must play a central role.  He commented “They are the ones that are going to be the basis for these changes to come.”  At the same meeting, UNFCCC head, Christiana Figueres galvanised the discussion by saying “Governments moving, businesses are moving.  Watch out world, we are going to do this.”

Joining the Sustainable Innovation Forum Stakeholder Launch via video link, Achim Steiner, Executive Director of United Nations Environment Programme (UNEP) further underlined the consensus that “the role of the private sector in terms of innovation and technology, in finance and investment… is going to be crucial”.

As well as underlining the central role of business at the climate talks in December, the Sustainable Innovation Forum Stakeholder Launch touched upon the challenges and opportunities for Paris as the host city.   Celia Blauel, the Deputy Mayor of Paris (pictured top-middle) commented "Paris has been heavily involved in climate actions for ten years now and 2015 is a very big year for us to move faster on public policies that we are implementing to tackle climate change.” She went on to say “We expect 20,000-30,000 people.  One of the key elements that could make this COP different, with the Paris agreement that we are aiming for, is the close involvement and participation of stakeholders and civil society. The interaction between them and the parties to the convention should be a key element for achieving the agreement."

The launch brought together multiple stakeholder groups who are mobilising the move to a low carbon economy, including partners of Climate Action's Sustainable Innovation Forum 2015 (SIF15) that will take place during COP21 on December 7th and 8th. Attendees included organisations such as Forbes, CDP, IFC, International Chamber of Commerce, BMW, DHL, BMW, Avery Dennison and Carbon Trade Exchange.

During the evening it was also announced that the iconic national stadium of France, Stade de France, will host SIF15 in December.  Registration for SIF15 will officially open in September, please visit www.cop21paris.org to find out more and register your early interest in attending. 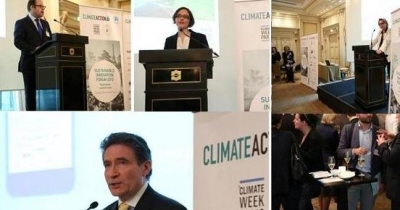